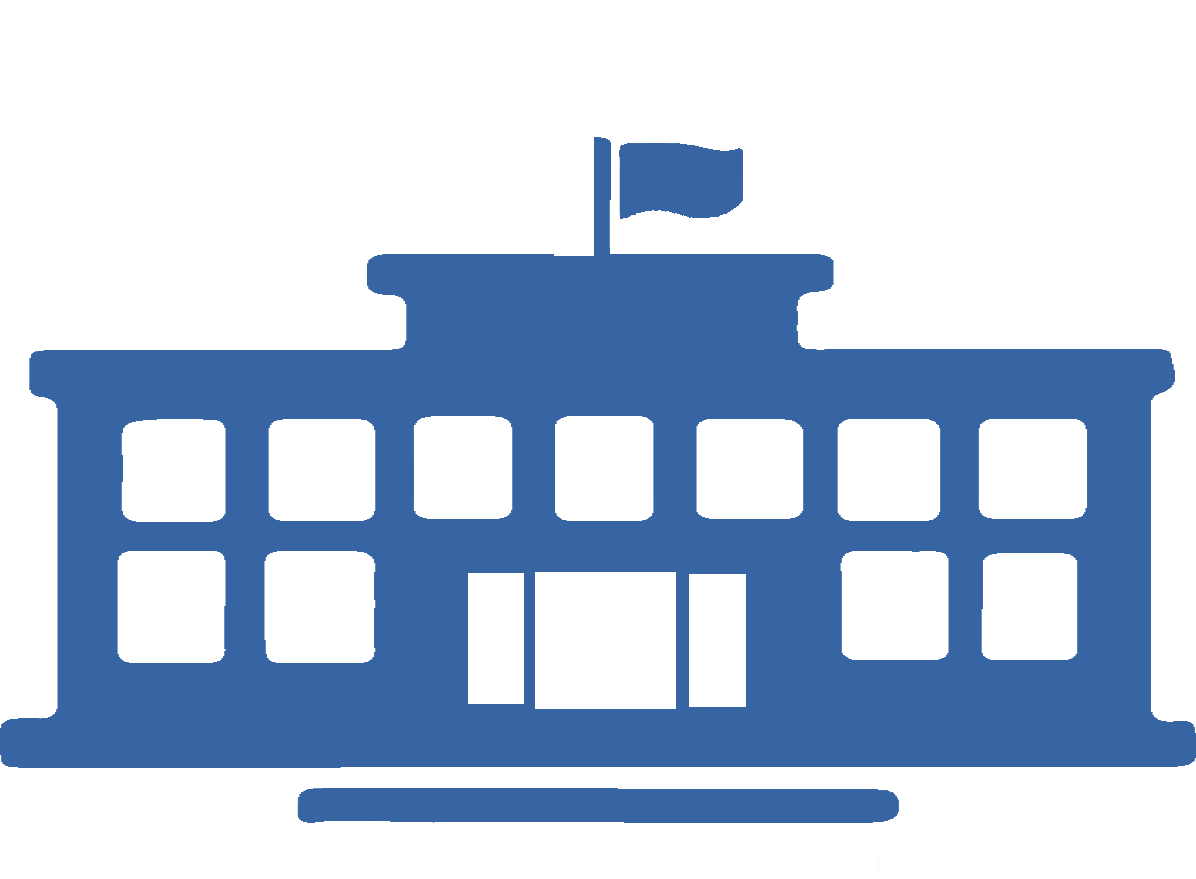 Mass Insight’s School Improvement services are organized around our Theory of Action©, which describes seven elements that our work with hundreds of schools, districts, and state education agencies over the last decade indicate are critical for schools to accelerate performance. Our team of former teachers, school and district leaders, and policy experts work alongside our partners to understand context and conditions. Together, we help our clients build coherence, capacity, and networks that improve student learning. For more information on School Improvement Planning, read our Road Map to Developing a School Improvement Plan here. 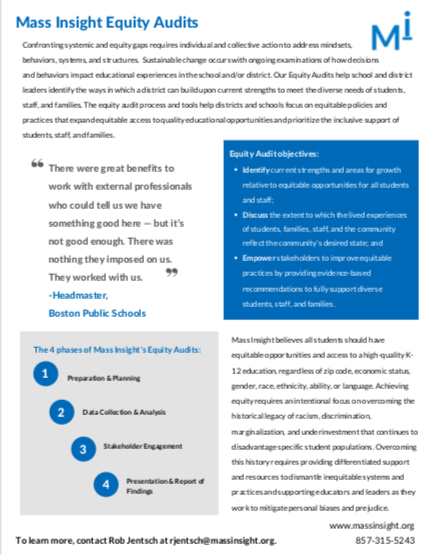 Need help with an equity audit?

Our Equity Audits help school and district leaders create the individual and collective action necessary to meet the diverse needs of students, staff, and families. The process and tools help districts and schools focus on policies and practices that expand equitable access to quality educational opportunities. Watch this video and read this blog to learn more about how  one school district built support for addressing equity gaps. Read this blog about questions to consider to ensure a quality audit.  You can download more information about Mass Insight’s Equity Audits here.

We work closely with stakeholders to offer a mix of strategies and supports designed to help schools improve and meet the needs of today’s students:

Based on focus groups, surveys, interviews, observations and analysis of data, Mi assesses the presence and relative strength of the 7 elements of Mi’s research-based theory of action for school improvement. Shortly after the on-site review, we provide schools with a detailed report that identifies strengths and challenges for each element, as well as high-leverage recommendations. Also known as a Comprehensive Needs Assessment (CNA), the SRA report provides a foundation for a strong school improvement planning process and a baseline for measuring school progress over time.

Mi assesses the extent to which a state agency is maximizing its available resources to develop the capacity of LEAs and improve the performance of schools. Our process includes surveys of staff and stakeholders, focus groups, interviews with school and district stakeholders, and data analysis. We begin with our seven-point framework, developed with SEAs through our state development network; we also offer significant customization to assess particular initiatives, programs, and divisions/offices of the SEA. Our reports conclude with a limited number of high-leverage recommendations and are often a starting point for strategic planning.

Mi facilitates development of evidence-based actionable school improvement plans that address the root causes of low performance. Our process includes four critical stages: diagnostic, root cause analysis, strategy & goal setting, and action planning. We describe each in our Road Map to School Improvement Planning. An expert facilitator guides a school’s leadership team through each stage of the process, ultimately producing a strong plan.

We work with district leadership to lay out a process for engaging stakeholders, facilitate root cause analysis of low performance, and develop a coherent theory of action and strategies to improve performance. Our team has extensive experience working with district leadership to set up customized processes for building stakeholder investment in the plan, and for managing the plan to impact – what we call performance management.

Mi helps districts develop and support zones that provide schools with the conditions necessary to address the causes of low performance. In some districts, zones have provided a model for broader district and system transformation. Zones are made up of 4-7 schools, usually with common interests or challenges, e.g., K-12 attendance feeder pattern, similar performance challenges. Mi facilitates and helps districts select zone schools, identify the conditions needed for improvement, develop district policies needed for an effective zone, establish the zone office including assisting with selection and training of zone staff and support for zone implementation. Mi also helps to engage both community and school stakeholders in zone planning and implementation.

Mi helps SEAs identify and use their leverage to help build the capacity of LEAs and improve the performance of schools. Mi’s work with SEAs varies widely, ranging from development of SEA school improvement strategy to creating frameworks to setting up performance management systems that allow the agency to measure and manage their efforts.

Having great coaches is not enough to ensure that teachers receive great coaching. Working with districts across the country, Mi has synthesized what goes into a great instructional coaching program, and where there are common pitfalls. We start with our Instructional Coaching Framework and work with schools and districts to bring best practices to life through intentional design, training, and custom performance management systems aligned to our framework. Building on our national research, our tailored supports to districts integrate elements of improvement science, networked improvement communities, and the instructional rounds model.

Mi works with schools and districts to develop the capacity of instructional leaders (principals and assistant principals, coaches, and teacher leaders/department chairs) to implement and monitor school-wide instructional change. We believe that ILTs can play a critical role in implementing the school improvement plan (SIP), building consistent, aligned, and rigorous instructional practices, and building collective responsibility for the quality of instruction and student learning. ILTs can also be a barrier to progress if they are not carefully structured and led. Mi works with leaders on constructing the ILT, facilitating the development of ILT protocols and norms, and coaching leaders to develop and leverage a strong ILT.

Our approach to performance management is rooted in the belief that sustainable change requires the school leader and a representative team (e.g. ILT) to take ownership for the success of the school improvement plan. We work with the school leader and ILT to establish a regular data monitoring process that focuses on three questions: Are we doing what we said we would do in our plan? Is it making a difference? If not, what do we need to change? Our work includes creating data tools and systems to support data review and providing training and capacity-building for teams to examine data for continuous improvement.

Mass Insight’s staff has extensive experience in rural regions, and we believe that rural schools and districts have a critical role to play in developing the next generation. We offer our School Readiness Assessments, School Improvement Planning services, District Diagnostic Reviews, District Strategic Planning, coaching model, and performance management services to rural districts with customized plans tailored to the district’s size, capacity, and budget.

See how our School Improvement team can help your school or district plan for the unknowns of the pandemic. We have prepared a four step guide to pandemic readiness planning. Access the guide here.

Support for School Improvement Planning During the Pandemic

See how we can help your school create and manage an improvement plan for the upcoming school year and beyond. We have created a menu of our virtual services, which you can access here.

Mi has been in partnership with Aurora Public Schools (APS) since 2015. Our key work there has involved the design, implementation, and support of a zone of the district’s lowest-performing schools; this included leading a process that leveraged the state’s innovation act to secure the necessary conditions for improvement at each school. APS and the five participating schools have achieved a number of successful results related to the development of the first ACTION Zone in the district. Behavioral referrals decreased by as much as 39% and out-of-school suspensions decreased by as much as 49%. Both secondary schools successfully decreased drop-out rates, with Aurora Central High School reducing the rate by half. Aurora Central High School, which was the lowest performing high school in the state at the start of our partnership and in its final year on the state accountability clock, improved by a full level in the accountability system and avoided state takeover.

In Providence, Rhode Island, Mass Insight conducted a three-year capacity-building project where it 1) improved the process for monitoring schools to better align state requirements with district supports; 2) led the development of the Office of Transformation and Innovation, which supports schools turning themselves around and incubating new schools; and 3) analyzed central office supports to schools, culminating in a report to the City of Providence about the need to transform the central office.

In Evansville, Indiana, where Mass Insight has been working since 2012, the school system experienced the largest gains in the state's accountability system and is now the highest-performing large, urban school district in the state, and the number of failing schools has decreased by approximately 50 percent.

According to the 2014-2015 District Report Card issued by The Louisiana Department of Education, the number of failing schools in Jefferson Parish, where Mass Insight began working in 2012, decreased by more than half–from 50 to 22–since 2011. The district rating also improved from a “D” to a “B.”

Discover how Mi can help
your school or district improve.